The three main designs of shotgun are Over and Under, Side by Side and Semi-Automatic.

Side by side shotguns are mostly used for shooting game. As their name implies, their 2 barrels are side by side. 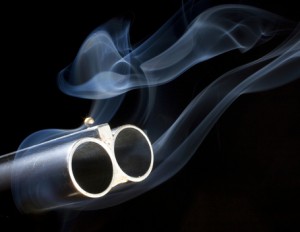 With over and under shotguns, the barrels are positioned on top of one another. Over and unders are regularly used for clay shooting. 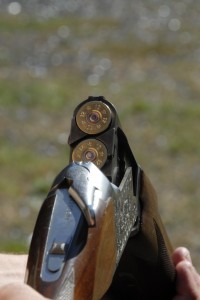 12 bore shotguns are favoured by the vast majority of shooters.

Many juniors, ladies and other shooters looking for a lighter gun with less recoil, opt for a 20 bore which is smaller and lighter and uses smaller cartridges.

A good gun sleeve will protect your shotgun from damage when it is carried.

There are many different bags and pouches on the market, from belt hung pouches designed to hold up to 50 cartridges at a time to large holdall type bags which allow shooters to carry a variety of different cartridges that may be needed for different clay targets during a competitive shoot.

Eye protection when clay pigeon shooting is critical because occasionally shards of broken clay can hit the shooter as they fall and these pieces are quite sharp.

Another sensible precaution is hearing protection. Eventually using a gun can potentially damage your ability to hear so protect your hearing with suitable hearing protection from disposable foam plugs through to electronic head phones or molded ear plugs.

Cartridges vary from company to company. Most people find a brand they shoot well with and stick with it.

Different types of target often require different sizes of lead shot for the optimum chance of hitting it consistently. Heavier pellets flies further but there are not as many pellets of lead shot in each cartridge. Smaller shot doesn’t go as far but you have a wider ‘pattern’ to break the target with at shorter distances.

Ask any good gun shop and they will be able to equip you with everything you need to start shooting.

Wherever you shoot skeet, the clays will fly through a similar path. This enables you to practice the same clays at any skeet shooting venue worldwide.

A skeet round comprises of twenty five targets, shot in sequence from the seven shooting pegs. Good shots will often hit one hundred without loss.

Sporting is more like game shooting in so far as every clay ground will put on a large variety of different targets. There is usually something new to try and the variety is endless.

Midi – 90mm Diameter – a smaller version of a standard

Minis are just 60mm across, but are the same design as standards and midi’s.

A Battue is a flat clay with a lipped edge. They often turn in mid-air and plummet to the ground when you least expect it!

Rabbits are designed to simulate running rabbits by running along at speed. They are the same diameter as standards (110mm), but thicker so they don’t shatter as readily.

Shooting is just like catching a ball. Your coordination moves your hand where the ball is going to be as it flies through the air. In the same way, you fire a cartridge so that the shot is where the clay is going to be.

Shooting involves 2 core skills; hand/eye coordination and being able to correctly read and understand each target.

The shot leaves your gun in a cigar shape. Your challenge is to assess exactly what the target is doing so that it flies into the path of your lead shot.

Your shot is moving at speeds between 1350 and 1650 feet per second, and the clay is moving as well.

Many experienced guns still get caught out by clays that are set up to be optical illusions.

The 2 important factors that will permit you to hit the target are gun speed and the precise moment in time that you decide to pull the trigger. The two main styles of shooting are ‘maintain lead’ and ‘swing through’.

Swing through is a technique that doesn’t involve measuring the distances needed to kill the target. Instead, you swing from behind, until you are happy you are at the correct point in front of the target to hit it.

A rabbit is a strong flat 110mm diameter clay designed to bounce along the ground at speed. Rabbits are often unpredictable with a bounce when you least expect it.

Quartering targets usually require less lead than crossers. Look to see where the target comes from & where it lands to help you to establish the clays path.

Driven targets simulate birds being driven towards you. Your gun barrels will hide the bird just as you want to shoot, so you have to use a swing through technique to hit them consistently.

Incoming clays take many forms, and can appear from many angles, but all basically head towards you, often hanging in the air before dropping before they reach you. They are often assumed to be hit and missed through a lack of shooter concentration.

Targets going away from you need lots of confidence and speed so you can hit them before they become too small to hit easily.

Loopers require maximum concentration to hit. They are often quartering making them much harder to read, and can be hit on the way up or down depending on your shooting style.